The culinary pottery of Vallauris 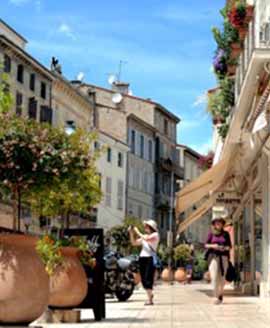 Vallauris Golfe Juan is a tourist town of the French Riviera near Antibes known as the "city of 100 potters". Its name (Valauria in Provencal) means "the golden valley". It is divided into two parts: the upper town is the old center, and the other part, the seaside from the port along the coast, towards Antibes.

The pottery of Vallauris is originally traditional culinary ceramics that was probably born at the time of the Roman occupation thanks to clay deposits nearby.

From the 16th century, Italian families from Genoa come to repopulate the city after a deadly epidemic. This is the beginning of a pottery activity of individual craftsmen.

In the seventeenth century, the craft activity develops and becomes major in the city. The tradition is born.

In the 19th century, the advent of the railway helped the potters to structure themselves. They work in larger factories that export their production, also by sea. Utensils and kitchen containers become the specialty of Vallauris. It is a terracotta pottery enamelled with a clear glaze.

Then the twentieth century brings its modernization and the activity of the artisanal pottery in the city declines. After the war, Picasso gives a new impetus to the pottery of Vallauris by settling in the city. This drains the arrival of artists like Jean Marais and many others.

Vallauris became fashionable in the years 1950-60, and developed ceramics as art, already initiated by the family Massier in the years 1920. Since, the craft continues but overall with decorative ceramics and tableware.

Cooking good and healthy - the benefits of culinary pottery

Today, few potters of the « city of clay » still make potteries of ancient Vallauris. The author of the pieces we propose is one of the last to continue the tradition of provencal pottery. These are beautiful kitchen containers with ancestral shapes, handmade Vallauris ceramics, such as the emblematic daubiere pot, the Provencal tian dish, the large skillet.

But other pieces more common and very useful in cooking, especially for making stews and ovenbaked goods, are available in our shop: ceramic saucepan with lid, round baking dish, and various containers for art de la table.

Cooking in terracotta is healthy, it allows to gently cook ingredients keeping their own taste individually, without adding fat and without drying them. Ideal for cooking vegetables, for example, in a classic oven or even in the microwave. We wish you bon appetit !