Santons figurines of Provence: the art and tradition of the Provencal Christmas crib

History of the santons of Provence

What would be Christmas in Provence, France, without the crib and santons?

This is a very ancient tradition of representing the Nativity by living characters. It was born in the 13h century churches, thanks to Saint Francis of Assisi, which earned him the patronage of animals and santonniers.

It has gradually evolved into family cribs. They turned into small figurines made of various materials when the French Revolution banned them in public, which led families to use dummy figurines to continue the tradition at home. Christmas cribs are no longer public, only in homes, and is linked to Christmas history.

In the 19th century the Provencal crib became what it is today: a set of earthen characters representing the most common trades in a village. 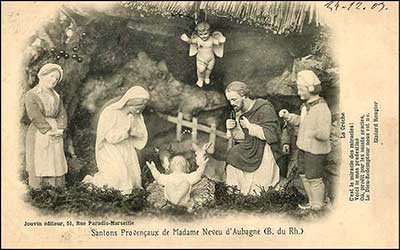 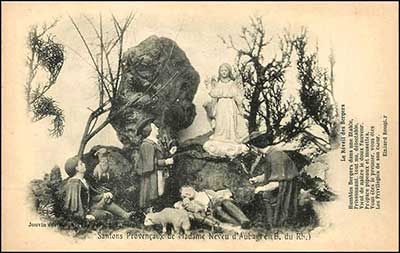 The religious theme remained, since they are called santons, from the Provençal "santoun" "little saint", although the only Nativity scene figurines are Joseph, Mary, and the child Jesus. The three wise men are added to the scene on the day of Epiphany, January 6th.

These characters from the Christmas crib were made of different materials such as porcelain, papier mache, breadcrumbs and plaster.

In Marseille, in the nineteenth century, the competition of Neapolitan merchants who sold santibelli plaster, has generated a resistance from the Provencal santons makers. They imposed the cooked clay and proposed their creations on santons markets. These are still very popular today, in parallel with the France Christmas markets.

The real santon of Provence is fashioned and painted by hand in clay. It’s a French craft, from the tradition. This tradition of the Provencal nativity creche continues today throughout the south of France, in a territory that corresponds to the influence of Occitan culture.

There is a high concentration of santonniers in Aubagne, Marseille, Aix en Provence and Arles.

In the Christmas creche, each character has a special function to recreate the scene of the Nativity surrounded by a village of Provence.

Apart from the stable, unavoidable, old Provençal crafts are represented: baker, miller, shepherd, garlic merchant, washerwoman, fisherman, and many others.

In fact, it’s to revive a village as if Jesus was born in Provence: the angel Boufarèu (blower) announces the news to the shepherds. All the inhabitants converge on the barn to see the Newborn. They cross the hill, with their baskets of harvest, their animals, go through the olive groves, and all the Provençal landscapes are represented. No character should turn his back on baby Jesus.

In Provence, from the end of October until the end of the year, the santons markets take place in the big cities and villages. Like during crafts markets, craftsmen specializing in the production of terracotta figurines gather in one place to attract an audience.

The Santons markets are very busy before Christmas, but also in the week following December 25th. Strolling with the family during the holidays, completing the collection of santons, admiring the pretty creches exhibited to get some new ideas… 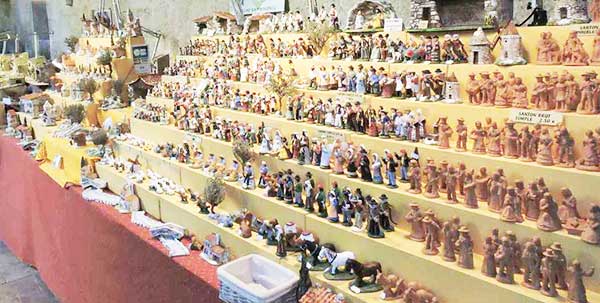 These markets are very popular with families because children are fond of the Christmas santons, and especially the animals. They particularly love ewes and their lambs, little white goats like Monsieur Seguin's goat (in reference to Alphonse Daudet), and donkeys from Provence.

It’s also a wonderful gift idea for a child: give him a santon, and you will immediately see his reaction. He will be immediately seduced, and if you tell him that it’s fragile, he will take care of it as the apple of his eye!

It will be an opportunity for parents to teach them to appreciate the beauty of a hand-made object : fashioned in a mold, for outline, then retouched to bring all the necessary accessories, and painstakingly painted to the smallest detail.

How to create a Christmas craft nativity creche?

Here is how the Provencal people settle their creche.

First of all, we must provide essential elements for staging, the opportunity to go for a walk in nature with children (who will be so happy !) The following objects must be collected:

Once all the elements together, it is then necessary to set the creche, being guided by the chosen situation (on a piece of furniture or on the floor). 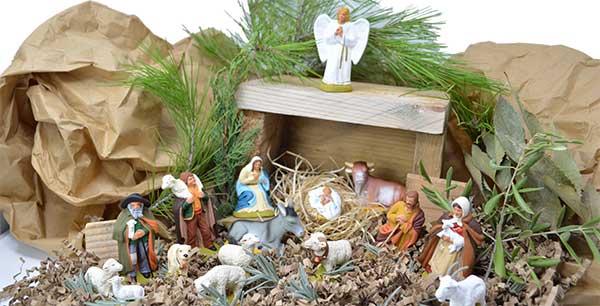 First put the protection stuff, then the boxes that form the hills. Cover with crumpled paper, and arrange to adjust the height and depth. Secure the paper with stones (which hold better than the duct tape). Cover the base board with moss, completely or not, depending on whether you have placed kraft paper on it.

Add plant branches by creating a landscape and using the stones to make them stand up. To make the scene more real, you can use aluminum foil to show a small stream, pine cones, dry grass, etc ... Let yourself be guided with your inspiration of the moment, and what we can find in the garden or the nearby forest.

The children will be happy to make small huts with pieces of wood or thick drawing sheets. Light effects can be provided with electric garlands to highlight the perspectives and liven up the scene.

Let's not forget the main elements, obviously, the santons.

The manufacture of santons

There are two types of santons: unique pieces that are modeled by hand (without molding) and series santons created using a mold. The manufacturing steps are as follows: 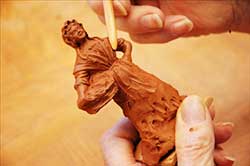 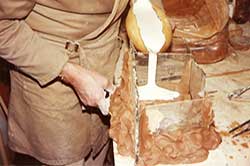 The creation of the mold 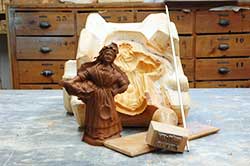 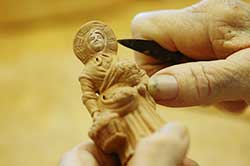 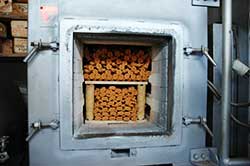 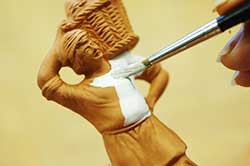 How to arrange santons in the crib?

They can be of different sizes for perspective effects if the depth of the scene makes them possible.

You may install them as follows the Nativity characters: first Joseph (on your right) and Mary (on your left) in the stable, around the manger made of a few strands of straw. The donkey stands behind Mary and the ox at the opposite, behind Joseph. They will warm the little child with their breath in the cold of the Provençal winter.

It’s very important to respect the place of the donkey alongside the Virgin, because he carried her to Bethlehem. In recognition, the Virgin marked the donkey of Provence of the Cross of Saint Andrew.

The angel Gabriel is placed above the barn, often in balance. Above all, do not put the child Jesus in the manger before December 24 at midnight in respect of the tradition!

Let's talk now about the main characters, besides those of the Nativity.

The other santons are installed without much protocol, except the "tambourinaires" who are close to the stable because they play their instruments (galoubet and tambourine) to celebrate the advent of Christ. These are the representatives of the Provencal society of the last centuries, with a mixture of notables and modest peasants.

Among them, the best known are the "ravi", a man who raises his arms to heaven, the shepherd and his sheep, the fishmonger, the man with fagots, the washerwoman, the Arlesienne, in her most beautiful dress, the miller coming back from the mill with a bag of wheat on his back, the fisherman, the garlic seller, the old woman sitting on a stone wall, the priest, the young girl with a bouquet of lavender, ... it’s a long list!

And the santonniers still create new characters today that complete the huge collection of santons, but always taking care to keep the trades of the nineteenth century.

Once completed, the crib and staging looks like a Provencal village of the nineteenth century, illuminated by a party. The result is quite magical and the time spent making this decor is well worth it.

The creche will stay in the house all the month of December and a good part of January. The French Christmas traditions dictates that the crib be dismantled before Candlemas Day on February 2nd.

Posted in: Culture and traditions in Provence, History and heritage of Provence, Provence Crafts