Pâques means "the passage". The word comes from "Pesach", the Jewish Passover celebrating the liberation of the Hebrews who crossed the Red Sea to flee Egypt. This name is taken up in the Christian religion because the Passion and death of Jesus took place during the Jewish Passover.

This holiday is therefore very important in the Jewish and Christian religions. Naturally, France, often referred to as the "eldest daughter of the [Catholic] Church", is largely imbued with this annual celebration of the Resurrection of Christ. It begins on Holy Thursday and ends the following Monday. It marks the end of the Lenten period that began forty days earlier. Easter Sunday and Monday are public holidays in France.

For believers, it’s a great celebration where baptisms are celebrated often. For all, it is a symbolic moment, Easter indeed coincides with the rebirth of Nature. The specific date fluctuates from year to year, as it is fixed on the first Sunday following the full moon itself following the vernal equinox. Moreover, all families, whatever their confession, celebrate Easter with the children, for whom they organize the Easter egg hunt. The people of Provence also bend to tradition.

Symbolism of Easter: the egg

By the way, why is the egg inseparable from Easter? This practice has both a pagan and a religious origin.

Since ancient times, it has represented fertility, rebirth and life. Perfection too, thanks to its shape. Receiving an egg was a good omen. Some peoples such as the Persians already offered eggs in the season of renewal. 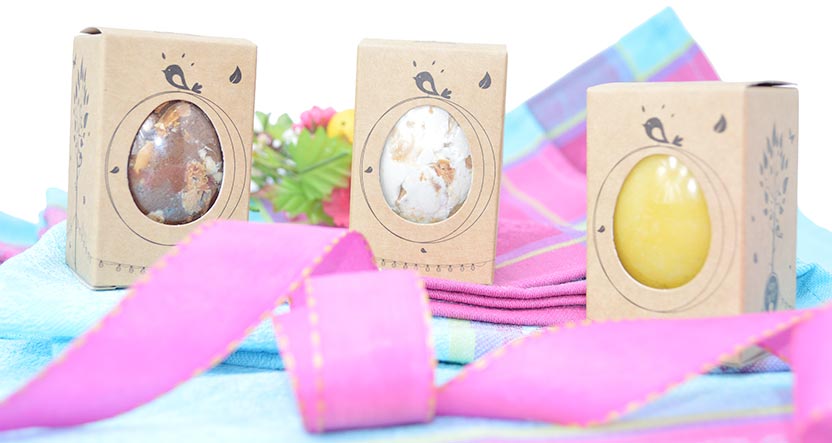 In the Christian religion, it was forbidden to eat eggs during Lent, a 40-day period of penance between Ash Wednesday and Easter Sunday. So people cooked the eggs to preserve them, painted them red to symbolize the blood of Christ and finally offer decorated eggs for Easter. Little by little, the decorations were enriched.

The tradition settled in France during the 13th Century. Among the nobles of the Renaissance, eggs became decorative objects, in gold, silverware or adorned with precious stones (the famous Fabergé egg was inspired by them).

In the 18th century, chocolate appeared in high society in Europe. First, people filled the eggshells with liquid chocolate. Then they found a way to solidify chocolate (in the 19th century), and little by little the old time easter candy looked the way we know today.

According to the Syndicat du Chocolat, in 2020, more than 325,000 tonnes of products were marketed in France. Easter represents more than 4% of annual sales. But the French are not the biggest consumers of chocolate. They only come in 5th position in Europe with 7.3 kg per capita per year, behind the Germans, Swiss, Estonians, English and Finns. On the other hand, they are more gourmet, without a doubt, since they eat 30% dark chocolate (the most refined in terms of taste) instead of only 5% for other Europeans.

Nowadays, the stalls of chocolate makers, pastry chefs, but also supermarkets are generously stocked with chocolate moulds: chocolate egg, Easter hen, bell, fish for the religious symbol of Easter, rabbit, sheep, chick and fish-shaped candies. It is a huge market with environmental and societal challenges. It takes 40 cocoa beans to make a 100g bar of chocolate. 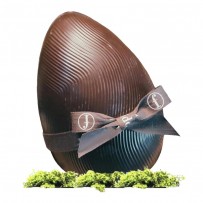 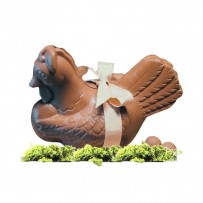 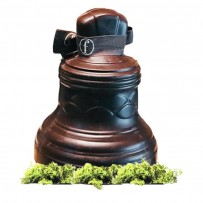 So if you wonder every year which came first, the egg or the chicken, it's also worth thinking about the impact your chocolate purchase will have on the planet. You can indulge yourself by buying less but better: for example, organic chocolate made by a craftsman who chooses his supply with care from among virtuous producers.

Back to tradition. The Easter period begins after Palm Sunday: this is the Holy Week. Maundy Thursday is the day when the bells of Rome fall silent in memory of the Last Supper. That day, the churches are flowered for the evening mass. In the Provence of our grandmothers, Christians "visited the altars" according to the expression. The altar contains the host consecrated for Good Friday. The people of Provence visited at least three churches to pray and admire the flowers arranged around the altars.

Next comes Good Friday, which commemorates the Passion of the Savior in the Christian religion. In remembrance of Christ’s sufferings, believers practice fasting, or at least take lean meals. We eliminate meat and fatty foods, and we favor low-calorie dishes, mainly fish-based. Because Lent, which started on Ash Wednesday, ends on Easter Sunday.

In our region, the traditional Good Friday dish is aioli. It’s made up of boiled cod, hard-boiled eggs, and vegetables (green beans, cauliflower, potatoes, carrots) to which you could once add snails picked up in the countryside. Nowadays, it’s rarer. They are sometimes replaced by whelks. 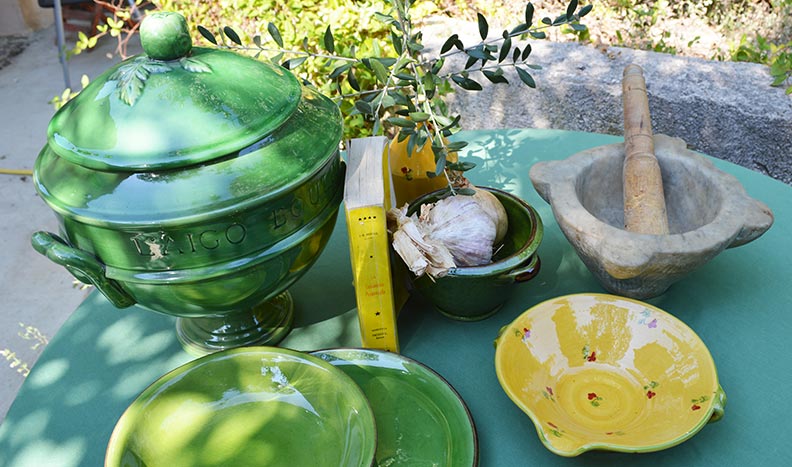 These ingredients are accompanied by a sauce very similar to mayonnaise but strongly flavored with garlic, which gave its name to the recipe (garlic is ail in French). The aioli is traditionally mounted with the force of the wrist, using a mortar in which the garlic cloves are crushed with a pestle, and the olive oil incorporated little by little. Its final consistency must be very firm: if the aioli is successful, the pestle placed in the sauce will hold straight on its own. The people of Provence love this traditional dish which is often offered in food shops and restaurants on Good Friday.

The following Saturday is that of the Easter Vigil mass during which adults are baptized. The bells that have remained silent for three days ring out again to celebrate the resurrection of Jesus. The little children are told the bells set off from Rome once blessed by the Pope. They bring good news to towns and villages, and on the way, they lay Easter eggs in the form of treats. (In Anglo-Saxon culture, the rabbit is supposed to deposit these presents for the children).

We are on Easter Sunday, and the children are invited to hunt eggs in the gardens. In Provence, as elsewhere, toddlers love the tradition, and, for the practitioners, they wait patiently in the church. They know that they will be able to indulge in their favorite treasure hunt as soon as the bells ring the end of the mass.

Easter Monday, weather permitting, is often given over to a picnic in a pretty countryside spot, as the Spring temperatures begin to heat up near the Mediterranean Sea.

It takes place on Easter Sunday and must be enjoyed with the family. We set up a pretty table in bright and cheerful colors of Spring. The theme of hens is very appropriate, like the Chanteclair tablecloth collection if you need some easter decorations ideas. We often display fish-shaped cacoa bites or small chocolate eggs on the table for the little ones.

The traditional menu for Easter is composed of eggs and the Paschal lamb, a symbol of purification and innocence in the Catholic religion. Among people of the Jewish faith, we also eat the ‘passover’, which here means lamb. 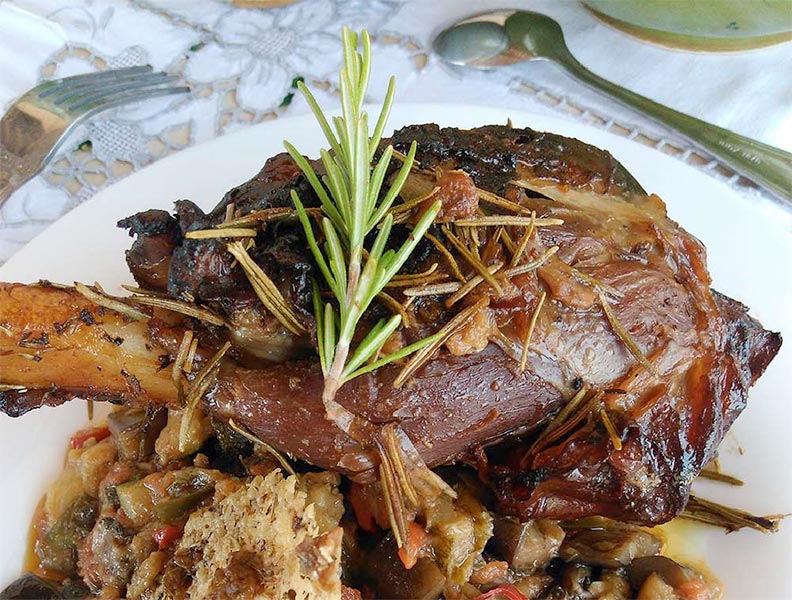 If you want an idea for an Easter menu with the flavors of Provence, I will describe the meal prepared in the old times by my maternal grandmother. First, we had mayonnaise eggs (mimosa) as an Easter appetizer. They were followed by a shoulder of lamb from Sisteron (the best) generously larded with cloves of garlic, and roasted in the oven in a large terracotta dish. With a sprig of rosemary, the meat was very fragrant. The accompaniment was often fried new potatoes, or small spring vegetables (peas, asparagus) if Easter was in April.

The Provencal Easter dessert does not necessarily take the form of a cake, as long as it is egg-based, again. Sweet omelets, oreillettes and bugnes are traditional Easter desserts here. The ile flottante (floating island), for example, is frequently found on the menu. There are few cakes or specialties attached to this celebration, with the exception of the nest, very rare today, and the brassado, a sort of small brioche crown the size of a bracelet. In the village of Crest, in Drome Provencale, the ‘couve crestoise’, a shortbread in the shape of a hen nest, still exists since the 18th century.

I remember that my paternal grandmother, of Italian origin, carefully prepared a shortbread Easter biscuit for each of her grandchildren. They were shaped like fig leaves, covered in egg whites, and they were topped with a hard-boiled egg whose shell she had colored.

In Provence, the dessert goes well with Clairette de Die, a light and very fruity sparkling wine from ancestral vines in the Drome area. It is perfect for the end of festive meals.

Then, we feast on chocolates if the cherubs are willing to share with the adults. Otherwise, it will be necessary to provide chocolate fish bites for a chance to taste cocoa pleasure (we have delicious ones here, handmade with organic chocolate).