Lavender from Provence, the ‘blue gold’ renowned throughout the world!

If we believe its nickname ‘blue gold’, French lavender from Provence is the dream of tourists all over the world. There is even a lavender tour to guide visitors to the fields of Haute Provence during the lavender flowering season.

Do we know enough about this beloved aromatic plant? Doesn't such a great fame too often hide the lavender health benefits and virtues?

Discover the secrets and treasures of our unique blue plant, symbol of the region from the blooming field to the harvest, including essential oil and how to make lavender sachets.

Origin of the word ‘lavender’

Lavender from Provence is first and foremost an aromatic plant known since Antiquity, originally growing in the western part of the Mediterranean area. We know that the Romans already used it in linen for its fragrance.

Lavender comes from the Latin lavandaria, which is also the origin of the word lavender in English, which means ‘to wash clothes’. It has therefore always been linked to household linen, to which it brings not only an incomparable fresh scent, but also other very interesting properties.

In addition, lavender is a medicinal plant with multiple virtues which was used in the Middle Ages. The lavender cultivation developed in Provence in the 19th century.

Did you know that lavender is actually a family of lamiaceae plants that includes several species? Here are more to help you tell them apart, and know the difference between lavender and lavandin.

This is the lavender scientific name of ‘fine lavender’, or ‘true lavender’, which is also called ‘officinal lavender’. It grows exclusively above 2600 feet of altitude. The lavender plant is characterized by a relatively small stem compared to other varieties.

There is only one flower stalk on each stem. Its flower is a slightly purple blue, but more open than the lavandin flower. This is the best for perfumers because of its delicate scent. This variety concentrates the medicinal virtues.

This is the ‘aspic lavender’ that grows up from 2000 feet above sea level.

It’s larger in size and has several ramifications with smaller stems in comparison with fine lavender. The scent of this variety is very camphoric.

It isn’t very present in France, but mainly found in Spain or Portugal.

It is a hybrid of the previous two varieties, and therefore it reproduces only by plants, and not by sowing seeds.

Lavandin (name in French) is a robust plant with long green stems forming a ball-shaped tuft. Its flower stalks are long and blue, almost purple. Sometimes it has ramifications with several flowers.

Its use is mainly focused on olfactory qualities, in the perfume and detergents industry, for the production of essential oils, lavender soap and to make sachets or a lavender bouquet.

Where are the lavender fields situated in Provence, France?

Lavender cultivation is mainly concentrated in two highlands in the east of the area. This is why we generally speak of lavender from ‘Haute Provence’.

One of them is the highland of Sault, capital of fine lavender (lavandula angustifolia). It’s located in the department of Vaucluse, very close to the mountain Mont Ventoux, above the Luberon Natural Park, and not far from the Baronnies Provencal Natural Park.

The second is the Valensole ‘plateau’, known worldwide for lavender fields as far as the eye can see. It is further south, not far from the Verdon Regional Natural Park.

In summer, when lavender is in bloom, hordes of tourists, particularly from Asia, assault the fields to take photos. Valensole lavender fields are so popular that the lavender farmers must ask tourists to be respectful of the cultures by displaying messages on signs. 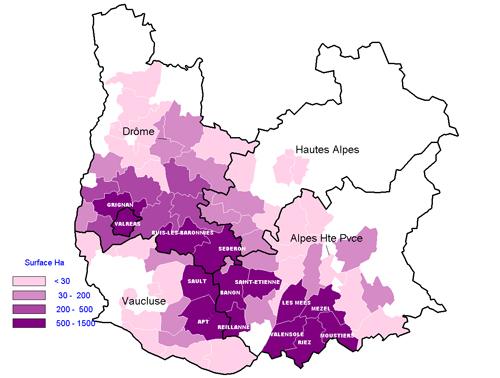 When does lavender bloom in Provence?

Lavender or lavandin are harvested in the summer at the end of July and early August, when the flowers start to wilt.

They first start to flower around mid-June, more or less early depending on the year. A stalk of purple buds forms at the end of the stem, and each small flower gradually opens, revealing an intense light blue tending to parma, so characteristic that it gave its name to the color.

The lavender flower then gives off a delicate and camphoric scent that attracts foragers such as bees and butterflies.

When the florets are ripe, their color becomes more purple, then blue-gray, and bees no longer care.

Now is the time to cut it. The lavender is cut with a billhook with a curved blade that follows the tuft of stems the picker has gathered in his hand.

Only the wooden stalks, that is to say the base of the plant, remain on the tuft. 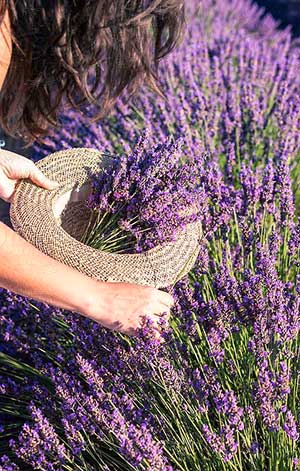 Bundled, the lavender stalks will either be prepared in bouquets, or sun-dried for essential oils and sachets.

Dried lavender bunches are now made of flowers that look like seeds: they drop easily. Essential oil, obtained by distillation, can be made with true lavender or with lavandin. The difference between lavender and lavandin is in the essential oil uses.

The ‘true lavender’ properties are very popular with perfumers and pharmacists, while the lavandin (hybrid) essential oil is only used to perfume cosmetics, soaps and detergents. 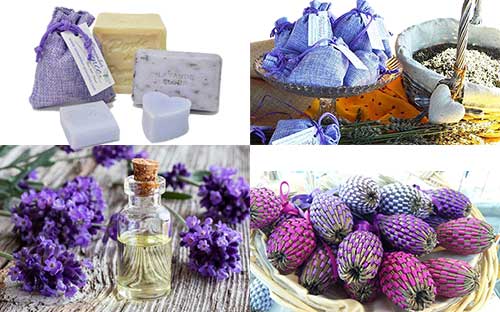 As to the lavender bags, the dried flowers must be collected: the stems which have been left in the sun for several days are crumpled by hand. This helps remove any residual moisture from the plant while retaining the scent of the flower.

How to make lavender bags ?

Making lavender sachets is very easy. Just take a small bag made of fabric, cotton, gauze or burlap preferably, which will let the lavender smell spread. If you don't have a drawstring bag, you can still get by. Just cut a circle of 8 inches in the fabric, place the lavender in the center and group together in your hand to form a ball. Then close with a pretty ribbon.

If you’re looking where to buy dried lavender from lavandin flower, our shop offers assortments, including lavender sachets with personalized message for a wedding.

For the more skilful, you can also have fun making spindles, this time using fairly freshly cut stems, and curving them onto the flower stems. You will then have to pass a colored ribbon through the stems, following a rhythm above / below which ends in a beautiful knot.

What to do with dried lavender ?

Or how to use scented sachets?

You can keep clean and fragrant laundry while protecting it from moths with lavender bags. The scent of lavender remains active for about two to three years. You just have to squeeze the sachets in your hands to reactivate its diffusion. They can be refreshed with 2 drops of essential oil.

Slip them in your cupboards, between the sheets, in the drawers with your clothes to always find them fresh and delicately deodorized. No need for chemical detergent, Marseille soap and lavender go hand in hand!

We often overlook the health benefits of lavender, and that's a shame because it has so many medicinal properties!

True lavender essential oil is THE must-have product in aromatherapy because it is very useful. Lavender is good for headaches, it relieves migraine, insect bites, sunburns thanks to its disinfectant and healing properties.

Soothing and relaxing lavender oil benefits are also good in massage against pain. Lavender essential oil has the power to improve sleep, and, together with Petit Grain Bigarade essentiel oil, suppresses nighttime anxiety.

Of course, it keeps lice away from the heads of our cherubs, just like household linen moths because it is anti-parasitic. It’s so powerful that only a couple of drops is enough.

So, enjoy lavender from Provence daily!

Tag: Lavender
Posted in: Culture and traditions in Provence