The most important holidays of the Provencal calendar - Provencal Christmas

Deeply rooted in the culture of Provence are caledales holidays. This begins December 4, the day of St. Barbara, and end on the eve of Candlemas, when we must defeat the crib ... It is a period that spreads out on the last month of the year and the first of the following year, the hardest to pass because the harshest winter in Provence. It is also a tradition closely linked to religion of Provence, predominantly Catholic, and this is certainly one of the reasons why this festival has special significance in their heart.

Traditionally the Sainte Barbe, it "puts the wheat," as the saying goes in the region. This means that is arranged in a cup one or two big handles wheat grains tightly packed flat. Watered lovingly and gently each day to see the sprout. After one week of young slender stems begin to grow and develop in height and take the thickness throughout the month of December. The wheat will be placed before the crib at Christmas and symbolize fertility of land and future prosperity. If the grain is fine and vigorous in the New Year, the year will be prosperous for the family.
Sometimes replacing wheat with lentils. Some put cotton in the bottom of the cup to deposit the seeds, but this is not essential.
This custom is widespread in Provence, so that we find grains of wheat bags sold in every bakery and garden centers in early December. Generally, children volunteer to "plant the corn," and play to see grow, which goes well with their expectation of Christmas.

The manger and figurines

What would the Provencal Christmas without the manger and figurines? This ancient tradition of the representation of the Nativity with living characters born in the churches of the sixteenth century, has gradually evolved into family day care in the form of small figurines made of various materials (porcelain, wood, bread, wax etc ...). In the eighteenth century, with the Revolution, nurseries that are no longer in the house.
This is the nineteenth century Provençal crèche became what it is today: a set of clay figures representing the most common occupations in a village. The religious remained, since the called santons of Provence "santoun", "little saint" though the only figures from Nativity scene are Joseph, Mary and baby Jesus. The Magi are added to the scene on the day of the Epiphany. 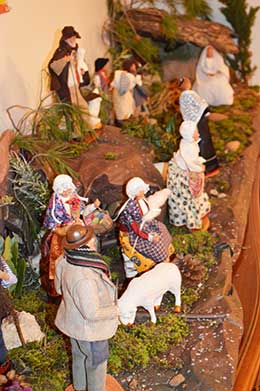 Here's how the Provencal make their crib:

It is first necessary to provide the essential elements for the stage, the opportunity to take a walk in nature with the children that will make it a joy:

Once all the elements together, the next "up" in the nursery guided by the chosen location (on a desk or on the floor). Ask first protective cartons and cartons that form the hills. Cover previously nursery crumpled paper, and arrange to modulate the pitch and depth. Fix the paper with stones (which maintain better than the tape). Foam cover the base board, completely or not depending on whether one has the nursery paper above. Add the branches of plants by creating a landscape and using the stones to make them stand up. To make the actual scene, the foil can be used to represent a small stream of pine nuts or dried herbs, etc ... Be guided by the inspiration of the moment and what we can find in the garden or in the nearby forest. Children will be delighted to manufacture small huts with pieces of wood or leaves thick drawing. One can foresee the play of light with fairy lights to highlight the prospects and animate the scene.

It only remains to install figurines: first Mary and Joseph in the stable, around the child Jesus layer of a few straws, and the donkey and ox around. Other figurines are installed without really Protocol, except, perhaps "Tambourinaïre" that are close to the barn as they play their instruments (fife and drum) to celebrate the coming of Christ. Most importantly, do not put the child in the manger before December 24 at midnight to respect the tradition! Now about the main characters, in addition to those of the Nativity. They are the representatives of Provençal society of the last centuries, with a mix of notables and small farmers. Among the best known include "delighted" that raises his arms to heaven Arlesienne in her best party dress, sucker returning the mill with his sack of wheat on his back, the shepherd and his sheep, fishmonger, the grinder, the garlic seller, old sitting on a stone wall, the priest, the girl with the bouquet of lavender ... the list is long.

The crib and staging looks like, once completed, a Provencal village of the early twentieth century, illuminated by a party. The result is quite magical and the time spent setting make this worthwhile. The nursery will remain installed in the house all the months of December and much of January.

On December 24, the hostess prepares the "big supper" to be thin and that one family will taste until the hour of midnight mass at the fireplace where the big Yule log burn up.

In the evening, the eldest of the family and the youngest (the Provençal called the "caganis") light a log in the fireplace, preferably wood of a fruit tree. It should not be extinguished before they burned three days and three nights. It is the ancient tradition of the "cacho-fio". By watering the log of cooked wine, pronounced some words in Provence to ask the blessing of God that ends with this sentence: "God Fague we Graci Veire of the year that Ven, e sian is not noun May that noun fuguen not lie ", in french:" May God grant us the grace to see the year ahead, and if we are not more numerous, that we may not be less. " 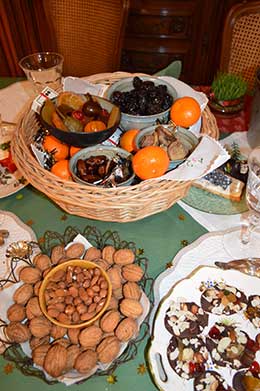 The stage is erected in front of the fireplace, covered with three white tablecloths that symbolize the Trinity. Often we put an extra place should a poor knock at the door that evening.
The menu consists of seven lean dishes based on vegetables and fish, the e number seven representing the seven sorrows of the Virgin. Not sought dishes rather recipes seasonal basic products: artichokes, fennel, celery, cauliflower, winter vegetables, are almost always present in this menu. U do soup, aigo boulido, bagna caudo (fennel anchovy), cod, chard in white sauce dishes are examples of traditionally eaten during the dinner. The thirteen desserts are placed on the table at the beginning of the meal, as well as all dishes, not to mention the corn of Saint Barbara.
13 desserts, the oil pump Again, the number thirteen is not a coincidence: it recalls Jesus and his apostles at the Last Supper.

Tags : Christmas in provence, Provencal christmas
Posted in: Culture and traditions in Provence